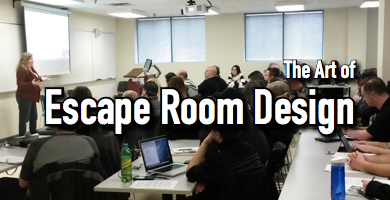 People are confused. I know I am. But watch what happens when the terms diegetic, non-diegetic, and mimetic come up in the escape room community. Conversations ensue longer than this article because no one really knows what these terms mean in relation to each other. This isn’t helped by the fact diegetic has different meanings in film and literature.

So I hope to break this down with an attempt to bring some type of standard to an industry which still can’t agree on what ‘brute-force’ means. 😀

Mimesis and Diegesis in Literature

In literature, diegesis relates to how a story is being narrated. After all, the word diegesis is from the Greek διηγεῖσθαι, “to narrate”.

There are other types of diegesis in narratology, like heterodiegetic, homodiegetic, and autodiegetic1, but this isn’t English class.

If diegesis is the narration, then mimesis is the dialogue. If “mimesis represents, diegesis reports; one embodies, the other narrates; one transforms, the other indicates; one knows only a continuous present, the other looks back on a past.”2

But mimesis in literature covers more than just dialogue. Originally, mimesis is from the Greek, μιμεῖσθαι mīmeisthai, “to imitate”.

“The evolution of thinking on mimesis suggests that copying and imitation play a powerful role in poetry and literature. They enable readers and listeners to suspend their disbelief, identify with characters, and get deeply immersed in a text.”3

So in simple terms, mimesis imitates reality and is the reason we get lost in a book. Diegesis helps us know what’s going on.

Mimesis and Diegesis in Film

In the film industry, diegesis is, for the most part, solely used in reference to audio and sound.

When people speak of diegesis in film, they usually mean diegetic sound. However, the original narrative meaning of diegesis is also used when talked about in film or theatre. Its “meaning is contained in the act of telling, narrating a story, which is contrasted with the act of showing related to mimesis.”4

Still, the bulk of references to diegesis in film focuses on the sound aspect.

This is the problem. Right here. This is why we can’t have nice things. Did you see one of the examples of non-diegetic sound was “narration”?

So when choosing a word to describe an off-screen sound element, like narration, they decided to inverse a word that literally means narration?

Mimesis and Diegesis in Video Games

Terms probably got even more muddied when video games came about.

You can see this in the video game industry, where the UI of a game is considered a non-diagetic element and in-game elements are diagetic.5

But mimesis has also been used to describe the UI and interface of video games. The Interactive Fiction community describes a sin against mimesis as a flaw in the game that calls attention to the interface.6 And with the advent of the wii-mote and the kinect, we have ‘mimetic interfaces’, controllers that use the player’s own physical space.7

So what is the difference?

Fortunately, Roger Giner-Sorolla, in his essay, “Crimes Against Mimesis” clarifies mimesis in IF gaming with this:

“Well-written fiction leads the reader to temporarily enter and believe in the reality of that world. A crime against mimesis is any aspect of an IF game that breaks the coherence of its fictional world as a representation of reality.”8

Thus, we can separate the two terms as such:

What are Mimetic and Diegetic Puzzles in Escape Rooms?

So what does this mean for escape rooms? The above two definitions certainly sound similar. Thing is, we can’t reverse what diegesis means today in the gaming and film industry. But we can apply it so it makes sense.

First off, when we talk about mimesis or diegesis, people usually refer to how the puzzles fit in the game universe.

Sure, diegesis and mimesis can apply to other elements, and in the future may be a bigger concern (there was talk about non-diegetic music used in escape rooms a while back), but for the most part, it’s in reference to puzzles. How do the puzzles fit in the theme of the world? How do they fit in the narrative? How do they fit within the logic?

A puzzle is diegetic if it fits the theme and reality of its game universe. This relates to how the puzzle looks. The props and parts of the puzzle fit in the universe of the game and do not look out of place.

If a player is in a room where they are exploring ancient Egypt, it would make little sense if they suddenly discovered a laser maze built by ancient Egyptians to hinder tomb robbers. Unless aliens were involved, you don’t see laser mazes in pyramids. Nor do you see televisions on pirate ships. Nor handcuffs in school. (Well, ok, maybe you’d have handcuffs in school).

Yes, you can make almost anything fit depending on the story, but who are we kidding? Escape rooms can barely handle narrative let alone world building.

A puzzle is mimetic if its existence and its solution reflect the reality of its game universe. This relates to how closely the puzzle matches reality as we know it. (You may wish to split hairs with me on what ‘reality’ is, but I’m not going there.)

Escape room logic is NOT mimetic because puzzles don’t exist in the real world like puzzles exist in an escape room.

Think of the solve the soup cans trope10. Imagine you had to get through a door in the kitchen by sorting soup cans on a shelf. The puzzle is diegetic because soup cans are found in kitchens! It fits the theme and reality of the world.

The puzzle is not mimetic because no one implements security via soup can arrangement.

If you had a safe, where would you keep the key? Would you hide it in a secret place? Entrust it to a close friend? Or would you put it in plain view inside a key maze that takes five minutes to remove with the help of another player for added team building benefit? Again, key mazes exist for entertainment, not for warding off theivery.

However, imagine you want to get in a vent that can be opened with screws. And elsewhere you see coins at the bottom of a pipe which can be used to unscrew the vent. Now you have to figure out how to get those coins out. In this scenario, the puzzles are mimetic because they make sense in the real world.

Of course, if your theme is the “Insane Inventor Builds Extravagant Puzzle Trap” trope, then yes, all the puzzles become mimetic, but there are only so many times you can use that excuse. (For the record, I’ve used that mechanic for every one of my events so I’m no better).

As a designer, I would encourage you to make your puzzles as diegetic as possible. Enthusiasts have a lot of pet peeves11, but the out-of-theme escape room puzzle is a common one.

However, a room filled with only mimetic puzzles is not only unneccesary, but extremely difficult to do. I personally know of only one escape room facility that does so, and it’s interesting in its own right and an impressive endeavour. I can imagine it forces the designer to constantly ‘Ask Why’ in regards to narrative and puzzle flow in order for everything to fit!

A mimetic room isn’t the end-goal for escape rooms, just like realism isn’t the end-goal for the film industry. The purpose of this article isn’t to drive all designers towards completely mimetic escape rooms. Why? Because fun is preferable to realism12. Think back to an Egyptian pyramid filled with intricate, mechanical puzzles to open up the final room. Has this ever happened in real life? No. But movies and games have ignored that for years and it’s far more entertaining.

Instead, apply mimetic principles to your puzzles. The puzzle doesn’t need a reason to exist in the escape room, but applying real world logic may help players solve it. (See Rule #6).

And so to reiterate:

Is there overlap? Of course! A mimetic puzzle will always be diegetic. Furthermore, mimesis isn’t necessarily binary. It imitates reality, and how well it does so can encompass a large range.

I’m sure there will be far more discourse on this; I haven’t even discussed how the immersive theatre industry views diegesis. But I hope this can be a starting point for the escape room industry and bring us closer to a consensus.