For the record, we do not solve every escape room we do. But experience lets you see the same puzzle mechanic over and over again, and doing a room with an expert team helps solidify healthy habits within a room. I do cover that in another blog entry: 7 traits of an Expert Escape Team.

Remember, however, the goal is to have fun. If these ‘rules’ don’t sound fun, don’t do it. I remember when Starcraft was fun, but then I discovered how to become more efficient. My winning stats improved, but it became less fun and more work.

My wife’s way of room solving involves the drink.

Some people can do a room solo. I can’t. For that matter, rooms that require a lot of searching need more people to help cover more area. Finding a good team whom you can gel with is important.

Recognize your Weaknesses – Personally, I suck at observation, math and memory. I’m good at pattern recognition, correlation and compartmentalization. When I put together a team, I find people who have different skills than I do, leading to…

Useful Skills – Being good at puzzle solving is hard to quantify and of course this won’t be an exhaustive list. Furthermore, not every room needs all these skills.

What to do in a Room

Common practices when we first enter a room, and then how we go about solving it.

Obey The Rules – Each room is different on the rules. For example, some rooms will allow you to remove the paintings on the wall. Others won’t. You will save valuable time if you know what you DON’T need to search.

Search – Rooms always start off with searching. Make sure you have someone on your team with this skill maxed as high as possible. One tip I’ve learned from adventure games: when you open a door to a new room, always look behind it.

Assess Situation – Assess what locks need to be open, and what type of combination it needs: key, number, or letter.

Find Patterns – You don’t stumble onto an answer and then find the lock it may fit (although that happens). You actively look for the combination pattern that fits the lock. You have a four number combination? Look for a clue grouped in four: four pictures, four words, four symbols, etc. You have a word lock of five letters? Look for words that have five letters. Recognize the patterns that can give you a combination and matches the locks in your room.

Work in Parallel – Sometimes a team likes to crowd around one puzzle, leaving other puzzles behind for the brand new exciting one. You will solve things faster if you work on separate puzzles at the same time. Yes, that means you won’t get to see all the puzzles. Yes, it also means you may not be aware what was used and not used, so…

Designate Area for Used Clues – For the most part, most clues do not need to be used again. For well designed rooms, a clue that needs to be used again will more than likely be obvious. Place the used clues somewhere easily accessible. This avoids people trying to apply the clue to a current puzzle.

Designate Area for Unused Clues and Lockboxes – A common tip given by LockQuest is to have all the clues spread out for everyone to look at. There have been a FEW places where this can be dangerous, (location of clue is important), but that leads to the destroyable puzzle, which is sadly unfair.

Discuss Solutions Later – I, too, like to know how puzzles are solved. Thing is, you don’t need to know while the game is still on, especially if you have 10 minutes remaining. Resist the urge to ask “How did you solve that?”

Share Everything and Communicate – It is important to not keep clues away from other teammates. It’s also important to recognize when someone is busy working on a puzzle, and shouting out random things you find is not exactly ‘communication’. You may have to tell a person multiple times what you’ve found. This is far more vital in a room where the team is split up. For example, if they are locked behind a gate, they can’t see what’s on the other side of the gate, but you can. Always share found codes, numbers and clues in this case.

After a while, you will start to see similar puzzles. This is not as satisfying to solve, but it does get you through a room quickly.  The following may be a bit spoilery, but there are puzzles we constantly run into.

Know When to Stop – This is broken into three sections:

Cipher Puzzles – Letter substitution is used a lot. Sometimes the number combination is encrypted. You will start to recognize these patterns: five letter words that end in a double letter is three, three letter words that start with ‘O’ is one, ‘TW’ is obviously a two, etc.

Tracing Puzzle – This is a common puzzle used in many rooms. You will get a set of symbols arranged in a grid or something similar, e.g. numbers on a telephone, a clock, a block of letters. You will then have a sequence of those symbols which will trace out a letter or a number on this grid.

Try the solution – If someone proposes a solution, let them try it as opposed to arguing why it’s wrong. Sometimes, it’s far faster to just be proven wrong. Furthermore, if no one is working on a lock, you do not need to ask for permission to try your theory on it. Just do it. If people get mad that you solved a puzzle without them, find different teammates. 😀

Group Think Can Be Bad – This one is a bit tricky. I said to share clues, but try not to share too many ‘theories’. Ever been in a situation where you are on the only puzzle left, and everyone is trying a variation of a solution someone proposed? In the end, however, you find out it’s completely the wrong solution! Sometimes, it’s GOOD to have people add to a solution to help solve it. In other situations, the proposed solution is a rabbit trail that leads no where. There have been many times where our team breaks into two separate groups. If one group cannot get a puzzle, then they pass it to the next group without their theories on an answer.

It will happen, and it will be frustrating. Sometimes, it won’t be your fault.

Call in a hint – On average, if you cannot solve a puzzle within ten minutes, (which is a long time) then ask for a hint. After a while, you will start to gauge how far you’ve progressed and how much more you still need to do. You can then adjust your hint asking appropriately.

Brute Force – This does not mean breaking anything. If you know three numbers to a four digit lock, try every combination for the fourth number. That may be faster than actually figuring out the fourth number. It’s a bit cheap, but you know, think of it as an alternate efficient solution.

Let Someone Else have a Turn – If you can’t get a puzzle, let someone else try it. Check your pride at the door. If you want to be a hero, go play D&D or something.

Double Check Your Work – I was reminded of this by ESKPDobleCheck. It is easy to overlook something. Do not be insulted if someone else rechecks what you did, whether it be entering a combination, counting, deciphering, whatever.

Don’t Belittle – You have an hour or less to solve the room. Belittling people will not get you through that room faster. If you must show how superior your intellect is and the only way to do it is by belittling, do what everyone else does and reserve it to facebook and twitter. Practically, a solution you may think is dumb may be the right one. As mentioned above, sometimes it’s much faster to test the solution than to argue about it.

Don’t Argue with the Hint Givers – Sometimes a puzzle is not designed well. Other times, it’s probably you. Either way, it still wastes time while you are trying to solve the room. You do not need to justify why you didn’t get the puzzle, nor why you think their puzzle is crap.

Remember, I have different goals when I do a room: I assess it for puzzle design, and I try to solve it with no hints. Above all, I want to have fun and honestly, that’s what we’re here for!

Sometimes I get the perfect interaction in a team, sometimes we find a clever and unique puzzle, and sometimes, they let me use the name “Team Totoro” for the photo. Those are great times.

I hope this helps in some way, and happy escaping! 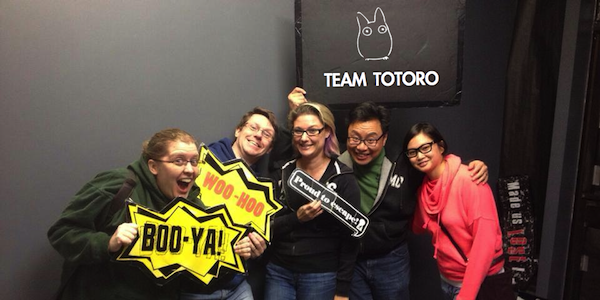 Why can’t all my teams be called Team Totoro?